By 1996, I had profiled a lot of movie stars. (See the list on the articles page.) It wasn’t how I pictured spending my life, or my career. As a swan song, I sent Mark Warren, my fantastic editor at Esquire, a parody of a celebrity road-trip profile for his amusement. It was meant as an affectionate joke and a way to unleash my frustration at the absurd celebrity profile genre. In this send-up, I profile a fictional It Girl named Allegra Coleman, a sumptuous young actor drawn from life and imagination. The piece ends with a James Dean-like car crash in which, presumably, Allegra is killed.

Ed Kosner, the Esquire editor-in-chief, surprised me by asking if it could be published, and by hiring Ali Larter, an unknown model at the time, to pose for the cover.  There was only one change they wanted made:  Allegra couldn’t die.

As it turned out, she didn’t. She became my first novel. The story begins with the car crash and unfolds from there. Clementine James, a sardonic celebrity profiler, is interviewing Allegra for her last assignment for Flame. Allegra vanishes after crashing the 1956 Porsche that she and Clementine have been driving across the California desert. Clementine winds up in the hospital – blinded in one eye, but suddenly endowed with the otherworldly power to speak to the dead.

“Warm and serious and funny and imaginative. The writing is cool, the plot fantastic.” – Los Angeles Times Book Review

“It would be difficult to imagine a better novel about celebrity than Martha Sherrill’s terrific My Last Movie Star.” – The Baltimore Sun

“Sherrill has crafted an absorbing, note-perfect examination of Hollywood’s culture of stardom, and film aficionados will savor the many cinematic references.” – Booklist

“How can such flawed and flighty people touch us so deeply? The stars who drop in on Clementine come across not as great heroines or guardian angels but more as friends stopping off for a sleepover — the kind of friends who affect us more than any wise man could. Eternal in spite of themselves, they give a sly new life to Cassius’ famous assessment in Julius Caesar, “The fault, dear Brutus, is not in our stars, but in ourselves, that we are underlings.” – Pico Iyer, Time Magazine 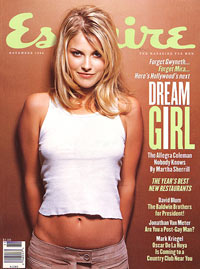 Click here to hear Martha Sherrill talking about her Esquire spoof with Noah Adams on NPR’s All Things Considered.