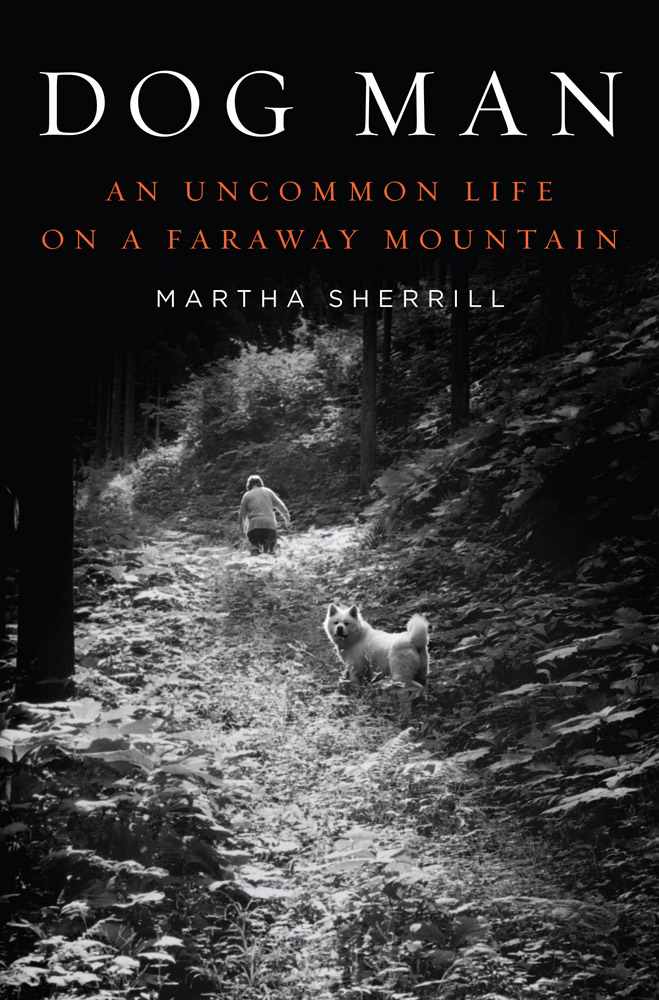 I was lucky to spend time in the fabled snow country of Japan to research this book, and to meet the Sawataishi family. Dog Man tells the story of the family patriarch, Morie, who lived a radically unconventional life — particularly in ultramodern and blatantly conformist Japan.

The story opens with a view to a world that Americans know very little about — the north of Japan during World War II. In a mountain village, we meet Morie, 30 years old, a fierce individualist who breaks the law by keeping an Akita dog hidden in a shed on his property. During the war, the magnificent and intensely loyal Japanese hunting dogs were donated to help the war effort, eaten, or used to make fur vests for the military. By the time of the Japanese surrender in 1945, there were only sixteen Akitas left in the country. The survival of the breed becomes Morie’s passion and life, almost spiritual calling. Spanning the decades from the post-war occupation to the late 1990s, we see Morie and his wife Kitako in all phases of their marriage and lives, and follow Japan’s turbulent history into the modern age.

“Dog Man is a peerless tale of a life’s work unfolding, written in prose so spare, rare, and beautiful it took my breath away.” – David Wroblewski, author of The Story of Edgar Sawtelle

“The Story of Morie Sawataishi and his magnificent dogs – with their superior intelligence, stamina, fearlessness, and almost spiritual call – is really about the search for enduring values and the determination to live life on one’s own terms.”  – Cathleen McGuigan, Newsweek

“Only a handful of visitors have tried to approach [Japan] through sympathetic imagination and not through surfaces or statistics, let alone analysis. Now, to that very small number, can be added Martha Sherrill, one of the most open and responsive writers around, whose special gift is for entering other lives so deeply that we feel their longings, their confinements, as our own. By the end of Dog Man, as Morie and Kitako pass through their eighties, we have come to know, and feel, their lives so fully that even the smallest detail . .. can bring tears. Sherrill somehow extends the story so deeply that it seems to stand for choices in all our lives.”  – The Washington Post

“Dog Man is an elegantly written account of a stubborn man who found meaning in old-fashioned values while his nation threw itself headlong into building an affluent, materialist, consumer-oriented society. In her wonderful journey to Japan’s snow country, Martha Sherrill introduces us to a world-and a gruffly independent personality-that transcend national boundaries.”
– John W. Dower, author of Embracing Defeat

“A story of a hard life and dedication to preserving a traditional dog breed in the mountains of Japan. Fascinating descriptions of life in rural Japan during World War II.” – Temple Grandin, author of Animals in Translation

“Here’s a story of a rare life lived in sharp contact with the natural world– not just mountain and forest, but even more with that most interesting of species, the dog. These akitas have wildness in them, enough to bring it out in those who look into their eyes. There’s not a sentimental word in this book, but it will move you strongly.” – Bill McKibben, author of The End of Nature

“Dog Man evokes the ancient myths: deep and quiet like high mountains in snow. Morie Sawataishi has learned from his beloved Akitas to embrace the wild. Read this book and feel that power.” – Neenah Ellis, author of If I Live to be 100

“Morie Sawataishi had never owned a dog, but in 1944, when the Japanese man was 30 years old, the desire for one came over him like a sudden… craving. During WWII, snow country dogs were being slaughtered for pelts to line officers’ coats; working for Mitsubishi in the remote snow country, Morie decided to rescue Japan’s noble, ancient Akita breed—whose numbers had already dwindled before the war—from certain extinction. Raised in an elegant Tokyo neighborhood, his long-suffering wife, Kitako, hated country life, and his children resented the affection he lavished on his dogs rather than on them. The book brims with colorful characters, both human and canine: sweet-tempered redhead Three Good Lucks, who may have been poisoned to death by a rival dog owner; high-spirited One Hundred Tigers, who lost his tail in an accident; and wild mountain man Uesugi. To Western readers Morie’s single-mindedness may seem selfish and Kitako’s passivity in the face of his stubbornness incomprehensible, but former Washington Post staffer Sherrill (The Buddha from Brooklyn) imbues their traditional Japanese lifestyle with dignity.” – Publishers Weekly 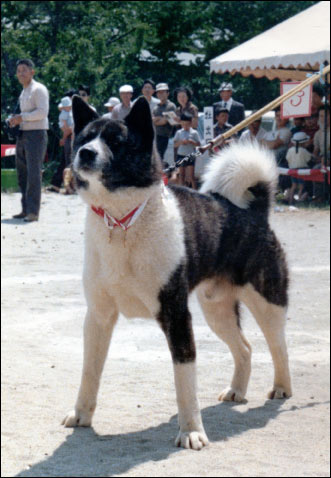 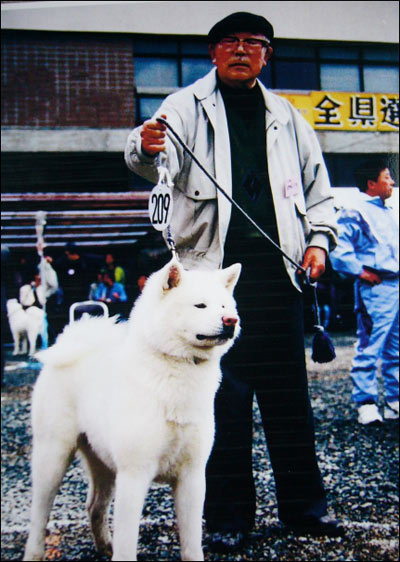 Morie Sawataishi and Shiro, his champion of the 1990’s